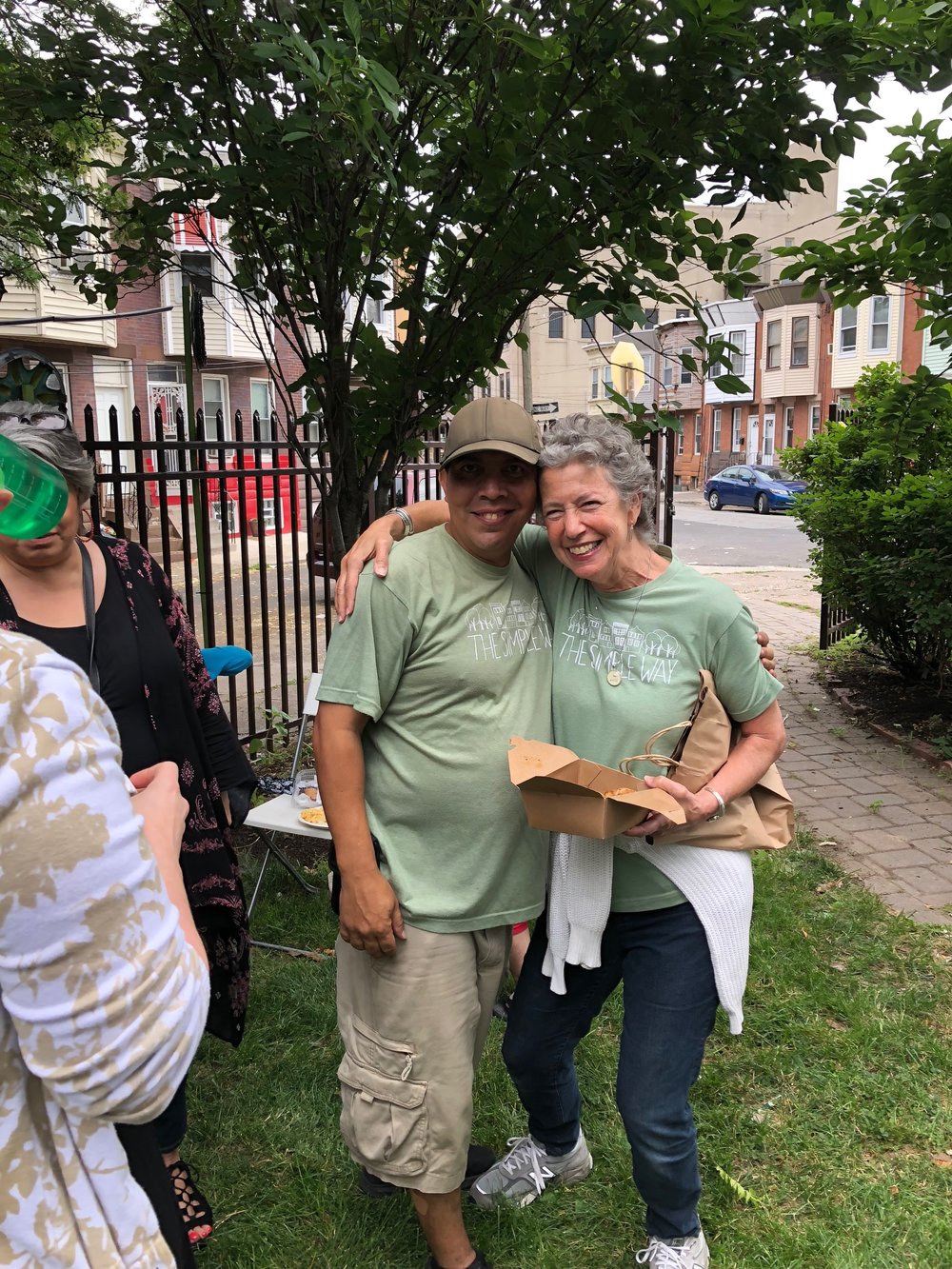 They all heard the thud. Moans followed. Chrissy Kind, a long-time supporter of The Simple Way, had gone upstairs after “the worst headache of her life” struck.

The plaintive sound was unusual; Chrissy was known as an energetic pillar of The Simple Way’s support team. “It’s a very special place for me,” she says, “It just embodies what the gospel should be. It’s so clear who Jesus cares about, and we need to stand up and make space for people whose voices are ignored. The Simple Way is a story of beauty out of ashes. It’s the gospel. God takes a little bit of what we have to offer and returns it a hundredfold.” She says earnestly, “We all give our little bit, and God returns it sevenfold.”

In the midst of the moaning, Caz, Mike Diaz, Chrissy’s sister, Valerie, and brother-in-law Andy looked at each other awkwardly, uncertain of what to do. Valerie, Andy, and Chrissy had gathered at The Simple Way to do a site visit on behalf of the Patricia Kind Family Foundation. Chrissy’s mother, Patricia Kind, had always encouraged her children to visit and emotionally support the organizations they gave to financially. Following in her mother’s footsteps, Chrissy had come to hear from The Simple Way staff. Unbeknownst to them, though, she was lying on the bathroom floor, a burst brain aneurysm pushing her out of consciousness.

Chrissy has few recollections of the event. “I remember sitting down, and that’s pretty much it. But God had His hand on me, and He had it happen at a time when all the people I knew and loved were close by and praying.”

Eventually, Valerie went to look for her sister. Although the door was locked, Chrissy somehow managed to open it. Valerie looked into the bathroom and saw her sister passed out on the floor. Immediately, she sprang into action and called for help. Within minutes, an ambulance and Chrissy’s other sister, Laura, a nurse practitioner who “just happened” to be working around the corner in Kensington at the Catholic Worker Free Health Clinic, arrived on the scene. The medics quickly intubated Chrissy, ensuring that her brain never lost oxygen.

As she left, the stunned staff team immediately started praying for protection, healing, and life as they awaited updates. Their prayers commingled with those of Chrissy’s church, Epiphany Fellowship Philadelphia, which was holding a prayer meeting that night. The leader of the prayer meeting knew Chrissy; she had taken care of his kids before, they had been on retreats together. He started weeping as he led the meeting, and the church poured out supplication for Chrissy.

It’s been exactly one year since that whirlwind event. Miraculously, Chrissy shows no lasting physical effects from the aneurysm, apart from difficulty remembering names and details. “That could just be because I’m sixty-two years old and kinda spacey to begin with,” Chrissy suggests.

She chalks up the extraordinary healing to the prayers of so many people and to God’s mercy. “I got out of rehab really quickly and had a few follow-up appointments. The doctors wanted to bottle whatever it was that had healed me; but it was really just Jesus.” She continues soberly, “God decided that he wasn’t taking me home yet. At the same time, I know others younger than me who have died. In God’s mercy and wisdom He makes these decisions. It made me think that God must still have something for me.”

Chrissy believes that a big part of that “something” means sharing with people experiencing material poverty. “I grew up with educated parents, wealth, white privilege. It’s nothing I earned or merited. My dad always said that we had to do what we could to help others.” She chuckled and shared one of her favorite quotes. “He always used to say ‘don’t take credit for a home run when you were born on third base.’”

At The Simple Way, we get to see home runs, miracles, and sevenfold return in Kensington. While not every day features a miracle like the one we got to experience with Chrissy, each one does feature the miracle to which Chrissy alludes: God’s ability to weave Shalom out of the gifts that diverse people bring. We’re so thankful that God returned Chrissy to us, and are thrilled to celebrate God’s faithfulness one year after it occured. Indeed, God still has something for us to do, and we are honored to faithfully follow.

I’m a people-oriented person. I’ve always loved being a part of a community and building long-lasting relationships. I love hearing stories from other people and what they’ve been through. My philosophy in life is that everyone has a story to share, and each story is...
Read More

Neighbor Spotlight: Loving Your Block by Picking Up Trash

All is not well in Philadelphia right now. Our neighborhood has been facing huge challenges in the throes of COVID-19. The recent killings of George Floyd, Ahmaud Arbery, and Breonna Taylor (among many others), have caused outrage and indignation to boil over. We are...
Read More

Update on Our Covid-19 Response

Thank you for your wave of generosity towards us! Your prayers, support, and gifts have cheered us in these trying times. As you know, we have been working harder than ever to love Kensington during the pandemic. We are trying to balance the sacrificial love this...
Read More

Pictured above: Simple Way Staff with the most recent Open House attendees. On the registration form there was a question – “why do want to take part in the open house”. My answer was “I don’t know, I just feel like I need to.” The truth is I had a lot of questions...
Read More

The first time I went in for my cancer treatment, everyone I saw at the clinic was so sad. I couldn’t help myself. I started to crack homeless jokes. I got a few gasps of surprise; people started asking me how I could be joking and telling homeless jokes in the middle...
Read More

Ten years ago on June 20, 2007, a seven-alarm fire broke out on the 3200 block of H Street. Its source was one of Philadelphia’s 700 abandoned factories. A hundred families were affected. Dozens of homes were evacuated, and many houses burned to the ground, including...
Read More

They all heard the thud. Moans followed. Chrissy Kind, a long-time supporter of The Simple Way, had gone upstairs after “the worst headache of her life” struck. The plaintive sound was unusual; Chrissy was known as an energetic pillar of The Simple Way’s support team....
Read More

Pictured above: An excavator lies still at the site of Esperanza Health Center’s forthcoming parking structure. Work is well underway at the bank building nearby, the building that Esperanza Health Center will move into in the spring. They’ve now turned to digging...
Read More
You're almost subscribed! Take a moment to confirm your subscription with the email we just sent you.We hope to see you at one of our virtual Practicing Sprituality gatherings soon. Look out for an invitation in your email.